Agent Colson is a continuation of 6" Colson wheel based robots started by Jamo and Colson Bot.

The robot is as simple as it gets. All the components strapped to an aluminum plate. A pair of Pololu/Sanyo 10:1 micro gearmotors pushes this thing at 5 ft/s. A 26 x 28 mm brushless spins the Colson wheel, though it is a touch underpowered. A pair of vextrollers (Vex Motor Controller 29) move the drive motors. 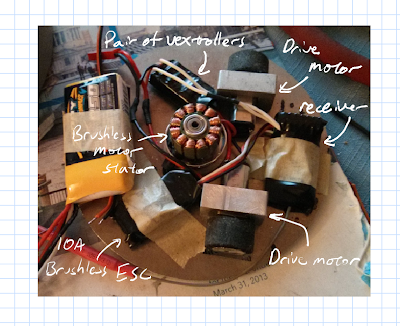 The Colson wheel itself is hollowed out on the lathe and the rotor of the motor pressed into it.
The two halves are held together only by the magnetism within the two sections of the brushless motor. It works okay, only coming apart during significant impact. In the spinup test video below, Youtube chopped and clipped the audio to hell, so mute the video for your ears.


Agent Colson took a beating during PA Bot Blast 2013 (but is still alive?). During its first match with the Weta clone Mondo Bizarro, it was beat on until it flew apart into two halves.

Then it was experimented on with Final Exam to see how hard Final Exam hits.
In the end, all the hot glue holding everything together came off, the brushless controller died, and a drive motor disassembled itself. 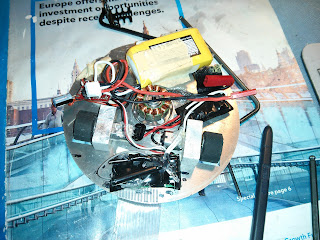 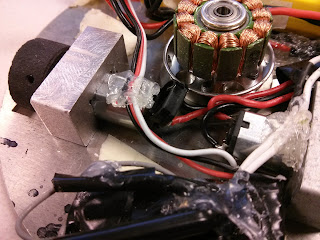 It was really fun though. Maybe I'll fix it up with a bigger drive motor for Dragoncon (but not really).

Gyro King was a finicky robot. Xo and I never got it spinning at our hoped for 6000 RPM, only reaching a measly 2000 RPM. In addition, motors have really low bandwidth compared to their drive circuitry, thanks to inertia and inductance. Thus, while the robot can drift and move while spinning, it was incredibly slow, and by the time you moved anywhere significant, the internal heading would have changed, and your target is somewhere else. Thus, it performed like other melty robots - waiting for the other robot to run into it and break itself. Not very fun, especially when your robot speed determines how much bite the weapon gets, leading to how much energy gets transferred.

In this 2 vs 2 match Gyro King is basically stuck in the corner the entire match. Granted, it only had one motor working at this time, but I don't think the second motor would have changed much.

A much more interesting match. This is at GMX 2012, with both motors working. This match also shows another problem: the weapon teeth have an annoying habit of flying off by shearing the four 6-32 screws holding it on. Here it was because The Hammer's weapon was able to dig underneath the teeth and pull them out. Since the frame is aluminum, it didn't offer much resistance. Gyro King won through a stroke of luck. The Hammer used a toggle switch for main power. It was hit so hard the switch toggled and shut down the robot halfway in the match.


The same competition, but against a nimble opponent. As you can see Gyro King cannot really do anything. It wins only through the error of the opposing operator accidentally driving into the pit, taking himself out of the match.


A fun match against a very capable robot. In the first couple of hits Gyro King's teeth are knocked out. One hit almost sends Gyro King out of the arena. You can really see how the limited mobility prevents it from taking advantage of Dominant Mode's inversion.

In conclusion, Gyro King was a fun project, an experiment in high impact and high strength components and seeing how many types of electronics we can stuff onto a single board, and a test of mettle, but next time I'm building something a little more aggressive. 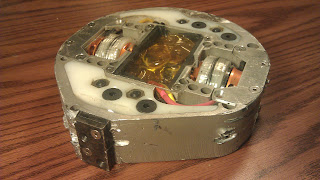