In the short period of time between Dragoncon and Sparkfun AVC 2017 I had a few upgrades in mind for Margin of Safety. First was a horizontal drum attachment with feeder wedges.

The idea was to have the same wedge defeating power as a vertical with narrow wedges, except with a horizontal weapon behind it. Hitting the face of the wedge would impart a strong sideways force, which is unusual.

The hub motor is a new design, able to be used for both the horizontal drum and a new vertical drum, fixing weaknesses with the cantilevered motor on the previous design.
The new design requires CNC turning, which is outside of the tools available to me. So I sent it out for fabrication by professionals.
The drum is two main pieces, the hub motor, made of magnets and aluminum, and the hardened drum itself. It uses a taper fit to allow the drum to span the full width of the motor. With this new design the drum is fully supported on two bearings, the motor is fully protected and not cantilevered, and the wider drum allows for less accurate driving.

I also experimented with a new color scheme for this robot: meat colored. I bought a stack of adhesive printer paper and cured meats and went to town at the scanner.
Sparkfun AVC showed the importance of keeping the 3D prints under compression. At every place where I broke that rule, there was cracking. First was the vertical attachment.
It split starting from every hole right along the layers. Second were the wheelguards. The rear end of the guards were kept under compression; those sides did fine. The front end was anchored to the front interface with plastite screws. Those came apart frequently, and I ran out of spares.
That failure also ripped one of the wheelguard screws out of the front interface.
Luckily the robot held itself together to win Sparkfun AVC 2017 with a record of 6-1, and was the last robot standing in the rumble. I lost one match due to experimenting with horizontal drum. Due to it's length and narrow stance it requires exceptional accuracy to wedge under an opponent. The sides of the wedges are easy to get under and vulnerable to impact, both from the opponent and from flying across the arena. It is likely still useful against midcutters, though I have not tested that.

All in all, I feel this is an excellent design once the wheelguard issue is fixed, while the flexibility of different weapon modules allows focusing on the fun parts of design while maintaining a tested reliable drivetrain.
Posted by aaronbot3000 at 22:40

For this robot, the goals were to 1) mostly 3D print the chassis on my home printer, and 2) connectorize the weapon modules. The 3d printing requirement is driven out of laziness. The result of this endeavor was Dinner Time 2, which I reverted back to the Margin of Safety name to restore continuity of the record. I just like coming up with names.

3D printed parts very isotropic, that is, the part strength varies depending on the direction of force. Tensile forces that pull along the layers are well resisted, while tensile forces that pull layers apart (delamination) are weaker. To get the maximum strength while avoiding forces that pull layers apart, I designed the frame elements to have metal parts clamp around 3D printed components. Most of the screws do not thread directly into the plastic, but instead go into standoffs that go through the plastic part. This way, when assembled, the plastic is held in compression by the screws and standoffs, preventing delamination when the plastic is hit by an opponent.
The 3D printed parts serve as armor, absorbing impact energy from opponents and distributing the loads across the standoffs. The standoffs connect the 3d printed parts to the top and bottom plates and prevent delamination.
Due to strength requirements and space constraints, the front interface is held on with two large turned standoffs. For quick manufacturing, the rear standoffs are off the shelf hex things. The frame is made of four 3D printed components: front interface, two motor supports, and rear armor. The three top and bottom plates hold the 3D printed parts together.

I was not happy with the minutes required to switch weapon modules. If someone else had a modular robot, with easy to swap modules, they could out-switch me before a match. As a result I designed a connector embedded in the interface between the weapon module and frame.
I used a six position blade connector, using two blades per phase. Each blade is rated for seven amps, resulting in a total rated capacity of 14 amps. My controller is set to limit battery current to 10 amps; phase current can be much higher. However, given the short duty cycle of the system (three minutes on, non repeating), I could get away with overrating the connector.

Placing the connectors into the structure required a lot of work. It had to be firmly connected, in a compact space. It could not result in any weak spots in the connector area. It cannot be impossible to assemble.

Custom PCBs were made to mount the connectors and provide large solder pads for the wires. The connector assembly was put into fitted sockets in the frame and weapon module. The white bar in the image above is to provide access to the connector so I can solder the motor wires on. The overall dovetail design is retained, though a little narrower.

Both weapon modules were more or less copied from the previous robot, with the connectorized interface. On the horizontal weapon this worked out great. In the vertical weapon this resulted in loads pulling apart the 3D print layers. This was deemed unavoidable for maximizing part reuse so I printed it extra thick.

The control board was remade removing the encoder and Maxon motor connectors to reduce the length slightly.
Finally, for fun, I covered the entire robot in two tones of wood grain shelf liner.
The stately appearance qualified it for the Dragoncon Teacup Racers, running without the blade, of course.
This robot went 5-0 at Dragoncon 2017 for first place. It was a close match at the end due to a broken connector, with no thanks to a "totally not entanglement on purpose" rubber latex wheels.

Some nonsense I've 3D printed and painted. All prints are done at 0.1 mm in ABS on a Wanhao Duplicator 6, primed with spray primer, sanded and filled with wood filler, and primed again.

This was a birthday gift for my mom. Painted with acrylics and matte coated.

I made this for a friend. I don't know why. Painted with acrylics and a few black dots with permanent marker.

I like the idea that Venus originally had really swole arms. After final priming this was painted with a mixture of epoxy and bronze powder. The idea was to polish and age it. Polishing didn't work so well, it tended to wear through instead. But it still looks alright.

It's one of my favorite Pokemon. 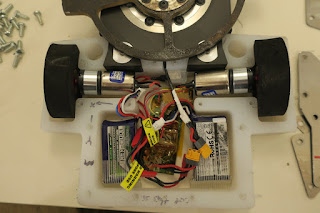