This version of Margin of Safety sought to solve three problems: 1) reduce thickness of front armor, to extend blade reach, 2) make the belt drive less annoying and more reliable, and 3) use brushed motors again.
To reduce the thickness of the front armor the hub motor holder was redesigned yet again. This time I went for a spline shape instead of fish shape. 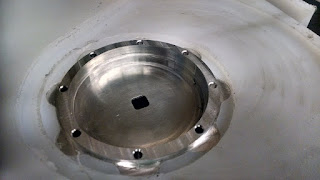 It is one of my prouder designs. The same spline assembly is still used after four events, with nothing more than scuffs.

The drive axle bearings were clamped between two T shaped pieces of aluminum. The aluminum then clamps onto the plastic with screws running through to keep it in place.
The idea was the foam wheels and soft plastic body would allow me to get away with cantilevered drive wheels. This assumption was false, however it did limit deformations before they affected drive performance. It was also successful in decoupling the side armor from the drive axles. 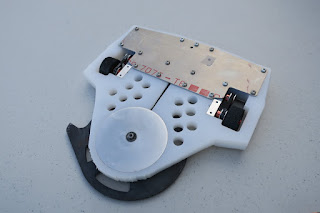 Fourteen half-inch holes were drilled because I used slightly thicker aluminum plates than what I modeled.
A new control board was made, using TI's DRV8821 current limiting brushed motor drivers, Allegro A4960 brushless controller, STM32F3 microcontroller, and L3GD20 digital gyro. This is to support using a bunch of 13 mm diameter Maxon gear motors I got off eBay. The motors did great, until I burned out the brushes due to overvolting them from 12 V to 24 V. Luckily they made audible noise before failure, so they could be preemptively replaced.
This robot won first place at Sparkfun AVC 2016, but not before breaking every weapon disk I had on hand.
Posted by aaronbot3000 at 00:29