The Velociryder is a two wheeled self balancing powered skateboard. A user stands on it, and it balances about two wheels, kind of like a Segway. The main difference is that the user stands sideways, like on a skateboard, and there are no handlebars. To turn, the back half of the board tilts, so when the user tilts in the direction to turn, the board turns in that direction. Source code for the control is listed at the bottom in the Appendix.

Version 1 was made mostly out of wood. Working from my house in the summer of 2010, I didn't have any fancy shop equipment, so the most powered tool I used was either a hand drill or a Dremel. It did work wonderfully. A lot of the part selections were sourced from XenonJohn's excellent Instructable.

I brought the board to Tech, where I teamed up with Jamison and Xo and entered the board in Georgia Tech's Inventure Prize. It was temporarily called Glide Board, for lack of a better name.


We couldn't present that crudely designed and constructed board, so we created a second version.


Made out of sturdy aluminum with CNC tools. The control code refined, the tilting part reinforced, this board looked and balanced amazingly. Unfortunately, the motors were a tad underpowered, so hills were a bit more trouble. We went through the challenges of the Inventure Prize, where we made to to the finals and appeared on public television. The entire competition is here, we are first to present.

Version 3 was never fully built. Made from transparent polycarbonate, it was to have fancy brushless hub motors. 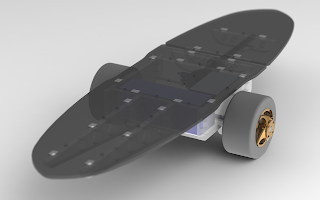 We had the frame assembled to present at the Inventure Prize, but couldn't actually ride it.

Version 4 was designed with parts from version 1 with a significant difference: strain gauges. This eliminated the whole tilting back section. 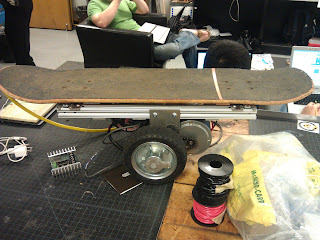 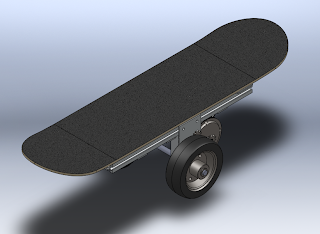 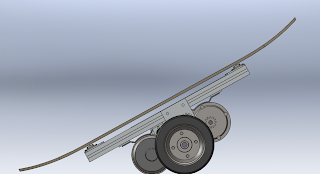