Margin of Safety 2 sought to improve on two things: 1) The center of balance, and 2) vulnerable front end. To fix the center of balance, it was designed with a belt drive to move the drive wheels forward.
The belt drive worked wonders in getting mass over the wheels but was exceedingly tricky to design and assembly. The belts had no tension adjustment, so over time they would stretch slightly and have to be replaced. The drive wheel axles had to be inserted from the outside of the robot through the side armor, requiring a hole and introducing a weak spot. When the belt needed to be changed the axles had to be removed through the same hole, requiring patient shaking and strong magnets.
Luckily there were no hits that cut through the side armor, although one came close.
The second improvement is sloped armor. I had bought a chamfer mill and made sure to use it everywhere.
Unfortunately hits to the front are rare so I was not able to test how well it deflected impacts.


The circuit board was spun to fix the drive reset issue.
Finally, a new weapon holder was designed. It kept the overall fish shape. 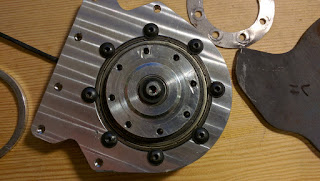 The robot won Motorama 2016 despite shattering a blade in the final. Since the shatter was asymmetric it was able to continue using the remaining pieces, with significant vibrations.
To mitigate this blade breaking issue an extra fat blade was made for Robogames 2016
It lost after a couple matches due to the brushless motors destroying the silver spark gearboxes. It was a familiar sight, seeing my robot get slower and slower with every impact until control is lost.

Here it is with all the pieces laid out nice. No issues with the weapon's hub motor, which was nice. 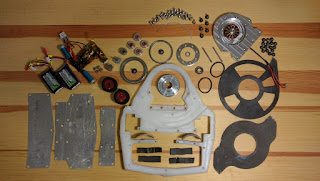