Gyro King is a translational drift beetleweight (three pound) combat robot. A joint project between Xo and I. Instead of using a dedicated weapon, the robot is the weapon. The entire robot spins to build up energy, which is then released into the opponent by running into it. This way the entire robot's mass contributes to the weapon.
To make the robot controllable, an extremely high angular rate gyroscope is integrated to find the robot's heading at any point in time. Once a fixed heading is maintained, the robot can slow down one wheel and speed up the other at the same point of its rotation to "drift" in a certain direction. It tells the driver what direction its facing by illuminating an LED for a short moment of its rotation.
The robot is controlled over bluetooth with a program aptly named "Gyro Pope" (because the pope controls the king, get it?). The robot uses two Turnigy brushless DC motors to spin up to ideally 5000 RPM or higher. 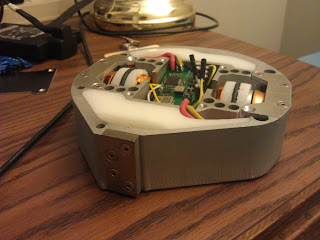 The Atlanta Mini Maker Faire did not treat Gyro King well, as it only had one motor working due to a last minute breakdown.

A new control board later, and Gyro King was spinning at 2000 RPM. It competed at the GMX robot battles. While it did not do so well in the one vs one competition due to limited mobility, it won the rumble competition.