Routing an analog signal all over the place with ribbon cable and no filtering and no buffering made it extremely susceptible to any bit of noise, not to mention the voltage sag due to the loading of the ADC. Given that I'm using 5k pots and I need precision to roughly 0.3 degrees, the loading effects are quite significant. How to fix? Twisted wires, buffers, and some hardcore low pass filters.


Twisted Wires
My friends advised I twist the wires to help reduce noise. To be honest, I'm not sure how it works with non-differential signals, but I supposed it was simple enough to implement, and it does clean up the rats nest. And so, twisted wires. 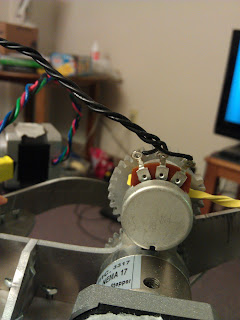 Nothing fancy like Chebyshev or Butterworth. Just a simple RC filter that does the trick. Using the formula 1/(2 * pi * R * C) = -3db frequency, a 3.9 kOhm resistor along with 2 uF capacitor, I get a cutoff frequency of around 20 Hz, which is plenty high enough for a mechanical system such as this. The schematic looks like this. 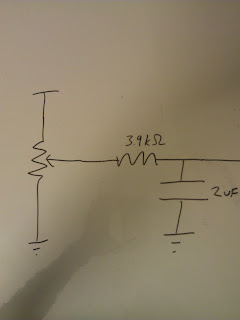 On the oscilloscope, it turns the input (black) into a nice smoothed line (red).

To fix the loading problem by adding in some op-amp buffers. Using unity feedback, I boost the current supply from a couple microamps to a couple milliamps. Excellent for keeping a stable voltage. The schematic looks like this. 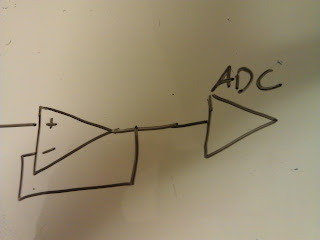 When I tried out my new circuit, the circuit seemed great. Until I hit the low ranges. Then the output shot straight up, as such. 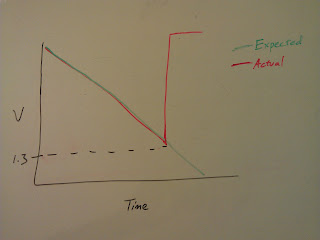 And it does so at 1.3 V, suspiciously close to two diode voltages (0.7 volts). The problem is that op amps are normally not designed to operate near their rail voltages. Here I use +5 and 0 volts, with an input voltage of 0 to 3.3 volts. Thus, it craps out near zero volts.

The solution is some rail to rail op amps. I used some op amps from TI, the so called TLV2774 Quad 2.7-V High-Slew-Rate Rail-to-Rail Output Operational Amplifier. It is rail to rail, so it can operate near its supply voltages, has four op amps in one package, though I only need three, and has input bias current in the picoamps. Also, free samples!

The entire circuit looks like this, with incredibly stable output voltage. 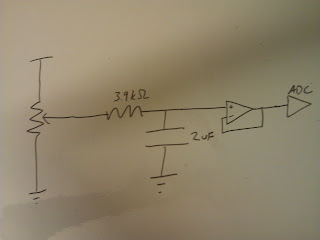 In addition to the analog filtering, I implemented some (relatively) long working digital filter. It takes 24 samples at 100 microsecond intervals. It then drops the lower eight samples and upper eight samples, and averages the middle eight samples. Yeah filtering!

Precision in measuring voltage is absolutely essential. Unlike a standard cartesian robot, where a little imprecision creates a constant offset, incorrect calibration in the arms causes the robot to not draw on a plane, but on some curved surface (I don't exactly know what it looks like, as it is some complex surface).

And so, with this new precision, a new video of the drawing!
Comparison of the output, with version 1 on the left and 2 on the right.