Scooty Brakes (and a stint through the rain) 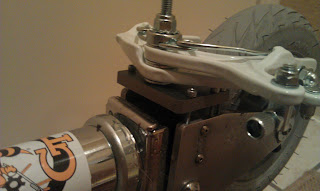 Using your shoe as a brake is okay for testing, but the wear gets ridiculous. So, I put a few holes in the front fork to mount a plate and the plate to mount a set of brake calipers on the front wheel.

The calipers I used were inexpensive bike calipers from Amazon. While I knew braking onto a plastic rim is not such a good idea, I thought it would still work okay.

Then, parts and assembly, after a particularly nasty ride in the rain back from work.

Due to the calipers blocking the screws, I had to slowly inch the parts together, screwing down half the screws, moving the caliper around, and screwing down the other half.
And then, I got excited and forgot to take more pictures. Long story short, after some testing, I decided they were worse than failure. Not only do the brakes not work, but the brakes and rims must be mortal enemies because they destroy each other. The pads exhibit significant wear and some chunks coming off already, and this is from a nice walking speed.
On the rim, it seems these bits have melted on. I'm not sure which surface made them.
I can't imagine can guess what would happen slowing from full speed. Rim failure and tire blowout, or I eat through the pads so much they stop applying pressure, or both.

Well, back to the CAD board. This time, I'll use one of these.