I built this robot when I saw this delta robot on YouTube. The speed and precision amazed me, and the three arms working in coordination intrigued me.

Coincidentally, I have always wanted to make some sort of non-Cartesian plotter. So I thought, why not a drawing delta robot?

There are the two directions of kinematics to solve for the robot:
In my robot, I only use inverse kinematics, but its good to understand the forward kinematics too. 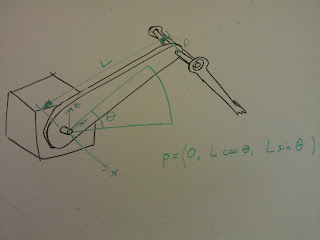 However, to put these coordinates in terms of the entire robot, instead of the motor, a few offsets need to be added. First is the motor's offset from the robot's origin. This changes the Y and Z terms. Second is the rotation of each motor. 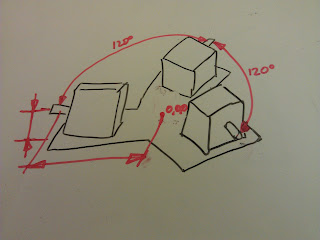 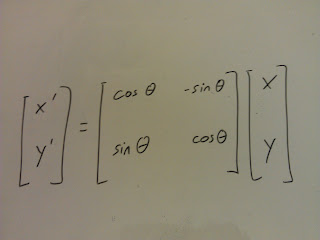 And so for each arm we can construct a sphere of every position the lower arm can be, centered between the ends of the lower arms where they meet the upper arms. 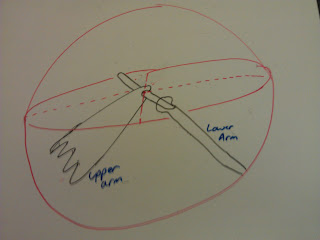 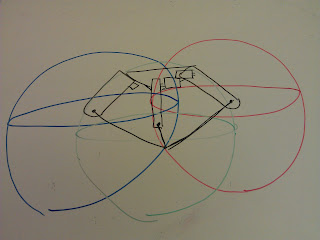 The problem I had with this is the offsets in the hand. 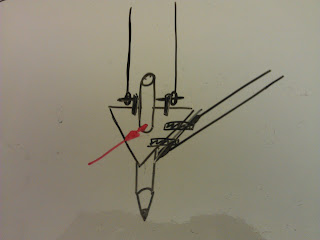 I never got it quite right. My best guess was to bring the three spheres closer equal to the size of the offset in the manipulator. However, since my algorithm didn't need forward kinematics, I never fully implemented it.

Inverse kinematics is a tad bit easier, solving for the intersection of circles, instead of spheres. 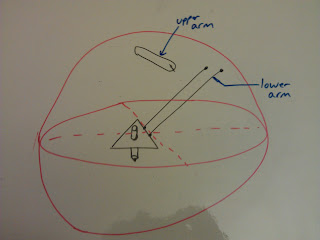 Each lower arm creates a sphere of possible locations, offset by a constant amount by the manipulator. Since the upper arms can only move change their Y and Z coordinates by rotating the arm, they have a fixed X. This reduces the sphere to a circle and the inverse kinematics problem to a circle-circle intersection rather than a circle-sphere (marked in green). 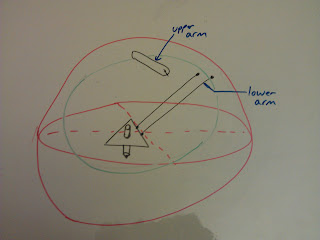 However, this simplification comes at the cost of unreachable positions. Checks must be implemented to make sure that a given point has a solution before trying to find it.

Anyways, I found the intersection of the circles by taking the line made by the midpoints of the circles and mathing them, as described in this website.

The actual code snippet that does the inverse kinematics follows. The actual "meat" of computation is relatively small.

When I made the code, I decided to flip the coordinate axes so I could use positive Z for the manipulator position instead of negative Z. As it turns out, this reverses your image and makes visualizing the robot tricky. If I were to redo the code, I would use negative Z, to keep it consistent with real life.

The robot's goal is to draw on US letter paper (8.5" x 11"). With this in mind, I guessed the length of the lower arms, simulating the arms in SymPy (symbolic math for Python) and then modeling them in SolidWorks. The only guideline I had was to keep the upper arms shorter than the lower arms for the best range and keep the two rods of each lower arm as far apart as possible for stability. I learned a lesson from that.

In version one of the robot, the upper arms were quite long, relative to the lower arm. This made for really great range in the Z dimension. For a drawing robot, this is useless. Since the arms were so long, small movements in the motors created large movements in the manipulator. Given the low precision of the servos, I got poor results in the accuracy of the drawing. I later cut the arms shorter with a hacksaw to get better results.

For the best range of motion for drawing, when the pen is centered on the paper, the upper arms should be near horizontal, relative to the robot, as pictured. 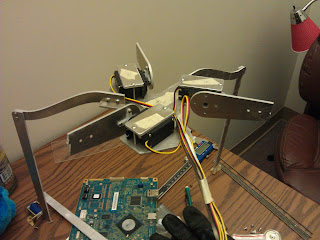