The accuracy of servos was maddening. Since I couldn't tweak the control loop or control the velocity, going back and forth across a line would create two separate paths. It overshot corners like crazy, and made the manipulator oscillate. The search began for a better control.

I had a few options.
With option 1, I would likely be implementing PID control with some sort of feedforward component. Option 2 was the least appealing, since I would have to adapt the circuitry to my servos. Also, they were pretty expensive. Option 3 I didn't seriously consider at first. Thinking about it, though, steppers have all the characteristics I want. I can easily control both velocity and position. All this without messing with control loops. Sounds pretty good.

The downside is that I have no absolute position reference to start the counting. But that's what potentiometers are for!

Learning from past mistakes, I made the upper-to-lower arm length ratio much smaller, to get the precision over a larger range on the XY plane, at the expense of Z traversal. Potentiometers were linked to the output shaft through gears. I cooked up something that looked like this. 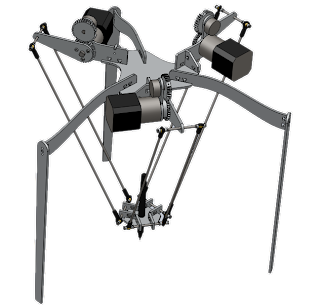 I also rotated the supports and added tabs, so they stay straight better. Later, I would find that using a more flexible metal (6061 aluminum) in this way is a bad idea.

I had a pretty convoluted way of getting both gears and arms onto the stepper shaft. Since I needed the arms to be able to turn past the potentiometer gear, the gears needed to be separate and machined separately.  And I also needed a spacer to keep the arms from colliding with the potentiometer gear. The solution: A stack of parts screwed together: 1/8" thick arm, then 1/8" gear, then 1/4" combination spacer and set screw holder.

SolidWorks really crapped out solving the model. Since I kept the upper arms floating to check the range of the manipulator, I kept getting overdefined errors if I tweaked the manipulator a little too far. Moving the manipulator took some time for the computer to solve the model. But I managed. As always, the design files are linked below in the Appendix. Time to find the right motors!

After much Google-Fu, I setteled on some 3V, 1.6A, 233 oz-in geared stepper motors from RobotShop. They have dandy planetary gearboxes with very little backlash (< 1 degree), with a gear ratio of 57/11 to 1. Given 200 steps per revolution, after the gearbox, I can get 0.35 degrees per step before microstepping. With my current eight microsteps, I get 0.04375 degrees per step. MWAHAHAHA.

But now to drive the motors from a microcontroller signal. I used Allegro's A4988 stepper drivers on Pololu's breakout board. They support 8-35V, up to 2 A of current, do really neat current control for accurate microstepping, and microstep 2, 4, 8, and 16 divisions.

What is microstepping? Stepper motors move in discrete steps, so to speak. Microstepping allows a motor to stop at various places between the halfway points, multiplying the number of steps a stepper makes per revolution. For example, my steppers are 200 steps per revolution. Microstep two divisions, and it becomes 400. Eight times, and I get 1600 steps per revolution. Of course, this comes at a cost of torque. More steps, less torque in the motor. Also, the microsteps are less accurate then the whole steps, but the loss is negligible in this case (3-5%). Since I'm driving a light load, the torque loss is acceptable too. More information on microstepping and how it's actually done on the Wikipedia page.

Cutting the parts in the Invention Studio at Georgia Tech lets me use a higher quality and thus better edges. Yay! Here is preliminary results. You can see the arm-gear-set screw holder stack on the stepper's output. 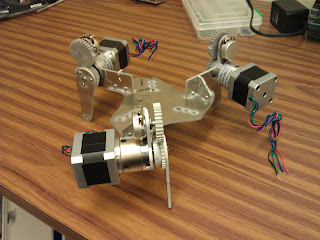 Cutting out the rest of the parts. I took the manipulator and ball joints from version 1. 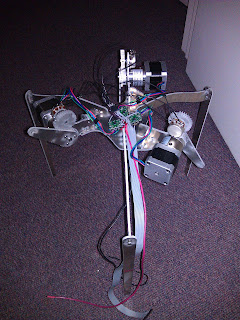 The entire wiring for the drivers and pots was done point to point with small wire. Nasty, nasty stuff. I'm not  proud, but it did work. 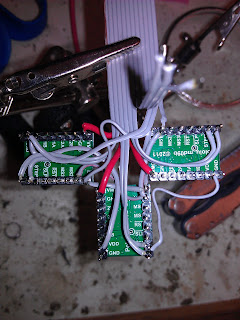 All the control signals were wired down through a ribbon cable. Yes, this also includes the analog signals from the potentiometers. Running around the motors. In a ribbon cable parallel to switching digital logic signals. And no filtering, high impedance potentiometers (5 kOhm), and you basically get really really bad data. But I didn't know this now because I have a new control algorithm to write for the steppers.

Coming Up Next
Appendix
Solidworks models for version 2: https://github.com/aaronbot3000/deltadraw/tree/master/solidworks_models_v2
Posted by aaronbot3000 at 14:08