Stability Margins was supposed to fix all the things wrong with Final Exam. The main points were the weapon being unstable and the delicate drive system. The robot ended up stable. A little too stable. So stable it didn't move at all. I wasn't a fan of it and forgot to take many pictures. 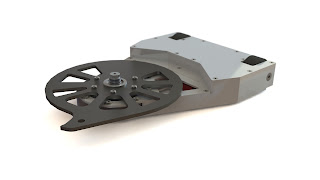 The main driving force for this design was to try to keep the flatness of the Final Exam, but also get inverted driving. The weapon motor design was good, so I reused that. For stability, I used a disk instead of a bar. But to get the bar's ability to have a small target for out-of-plane hits, the tooth on the disk sticks out a lot. To help save the drive motors, the wheels were indirectly driven with belts and the motors and gearboxes supported by aluminum clamps. 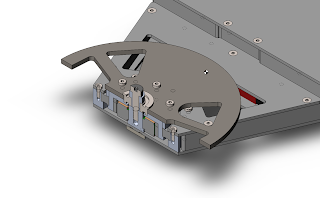 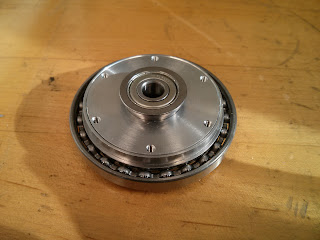 The weapon motor was largely the same, but with a bearing in the middle instead of a bushing. The blade itself was held on by six M3 screws, which was a mistake since they shear really easily. The blade was kept away from the frame with low head screws. 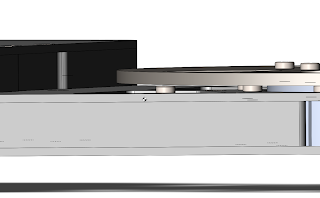 This was a 12 tooth, 14 pole motor, wound with 12 turns of 22 gauge wire.
The drive wheels were made of rubber vacuum tubing and HDPE hubs. Both materials sucked to work with. The tubing was abrasion resistant, not quite concentric, and impossible to cut accurately. The hubs kept slipping in the lathe chuck and bent around tooling, calling for scary oversizes. 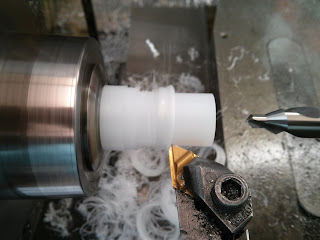 The belts were made by using the soldering iron to heat the belting up to the proper temperature and mushed together by hand. Many attempts and swears were had to get the belts the proper length.

The first problem is the center of mass is way far out from the drive wheels at almost 3.5 inches.

It was far enough to prevent driving on even smooth surfaces. There was simply not enough weight over the wheels. As a last minute fix, I drilled holes in the side of the robot so the motors could directly drive an additional set of wheels. 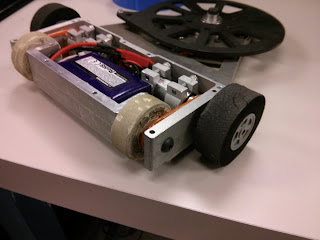 This made the robot four wheel drive, but only two wheels at a time. To protect the new wheels, I hot wire cut some foam. Basically adding water wings to the bot.

The outboard wheels drastically improved driving ability. But, since they were exposed, after every match I had to straighten the axles. Bent axles were the least of the drivetrain problems unfortunately. Due to the extremely rigid all metal frame, impacts from the weapon were relatively undamped as they traveled through the frame, up the very rigid aluminum motor clamps, and into the motor where they destroyed the brushes. During a match the robot will noticeably degrade with each hit on the opponent. As the competition went on, I ran out of motors to swap in and ran the robot with only three wheels, two wheels touching the ground at a time. This flaw eventually cost me the championship. 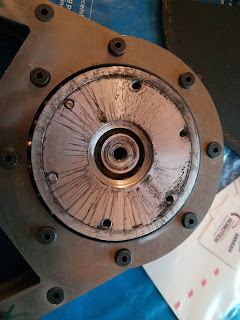